In Fourteen Hundred and Ninety Two, Columbus sailed the Ocean Blue. And ever since, people have been building monuments to him. In fact, one Internet site has a list of nearly 600 monuments to the European explorer.

Since we’re celebrating Columbus Day this week, we thought it would be interesting to help you find a few of the best Columbus monuments and other Columbus-related sites across the American Countryside.

San Juan, Puerto Rico
San Juan is one of the first places Columbus encountered, on his second voyage to the New World in 1493. Puerto Rico is a great place to take a relatively inexpensive Caribbean vacation, and there’s still lots of history to see there. The sites include a huge stone fort built to withstand attack from both the sea and land. The fort is open to the public, and gives a glimpse of the world as Columbus experienced it hundreds of years ago. 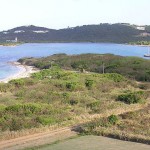 Salt River Bay, St. Croix
Speaking of the world Columbus inhabited, you can get a great look at it in its natural form at Salt River Bay in St. Croix. People lived in Salt River Bay for 1,500 years before Columbus showed up, but to this day, you can see the natural ecology of the place. A national historic park preserves marine estuaries and mangrove forests. And you can also see the remains of a fort built by French explorers in the 1600s. You can also see the precise place where European explorers met and clashed with natives of St. Croix. 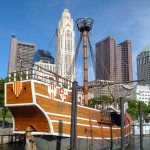 Columbus, Ohio
Columbus might never have visited Ohio, but one of the best places in the country to connect with his voyages is in the Ohio city named for him. For the 500th anniversary of the explorer’s first visit, Columbus, Ohio, built a 98-foot-long replica of the Santa Maria, one of his ships. Today, tourists can walk through the ship, and even book events there. The real Santa Maria never made it back to Spain, crashing off the coast of Haiti before the return trip. 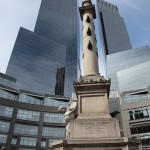 Columbus Circle, New York City
One of the busiest spots in the world features one of the most well-known monuments to Columbus. “Columbus Circle” is a traffic circle with a marble statue of Christopher Columbus set atop a massive column. It was erected in 1892 to celebrate the 400th anniversary of his voyage. Tourists in New York City almost always stumble across the monument, even when they’re not looking for it, because it’s right in the heart of New York City at the edge of Central Park and just north of the Theater District. 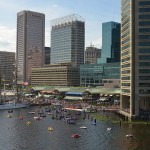 Baltimore’s Inner Harbor
Another of the largest monuments to Columbus is at Baltimore’s Inner Harbor. Carved out of Italian marble, the monument was dedicated in 1984. It includes intricate scenes of Columbus’s voyage and arrival in the New World, carved into the side. The statue is set in the middle of a larger area known as Columbus Piazza, dedicated to the memory of the explorer’s voyages.